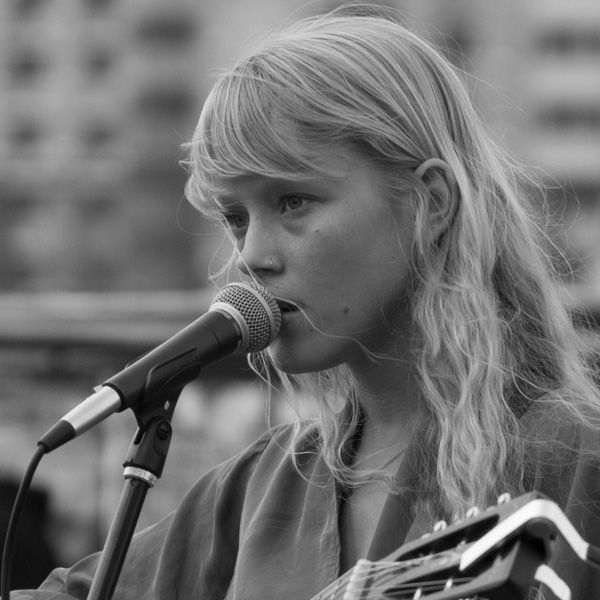 George Frangoudes is an ACM business student and a guitarist, also working for the mighty rock band that is Skunk Anansie. He completed the music journalism second-year elective, Clapham. Read more on his blog, Karmen.

Casting spells on the patriarchy.

To deafening applause, Alice Phoebe Lou flits on stage to the trance of the assembly of a sold-out Rough Trade East into a haze of paradise with ease and grace. Through moments of soft melancholia during ‘Nostalgia’ and ‘Ocean’, never will you experience an audience move between utter silence and resounding acclamation with such potent candour than those under the incantations of Alice Phoebe Lou, as if emerging from the silent depths of the sea to twilight’s tropical storm.
Wielding a shamelessly honest take on misogyny and the Patriarchy with new tracks like ‘Skin​ ​Crawl’ and ‘Society​’​, Alice is quick to send a chill down the spines of the closet chauvinists in the room.
During ‘Fynbos’ her stunningly harmonic voice stands alone alongside her fingers’ touch upon a hollow-body guitar, creating an ambience that floats through the room like smoke. Then for the dance numbers, Alice retires her Gibson to the stand and sways her heart away to the tight, rhythmic grooves of her band.
As a welcomed treat to this small sample of London-based fans, the South African artist offers a copy of her new album ​Paper Castles​ to all in attendance, a week before its release. Their appreciation is clear as the entire venue weaves through the isles of the record store in wait to get their copies signed.
Sure to attract the Instax wielding philosophy students in rolled cuffed skull caps, Levis and Anaheim Vans, Alice returns in Spring to EartH London to lead you to her lonely island far away, ‘further than any boat can reach’… bring your dancing shoes.