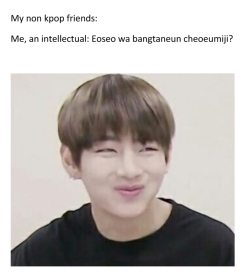 Do you know the feeling of being the only member of your friendship group with a good taste in music? Yeah, me neither. But, I do like sharing my ‘unique’ findings with others.

Nicole is my friend and fellow TFC writer. I decided to introduce her to K-pop, but we got side-tracked, so I only showed her BTS. This is her reaction.

Nicole, you have never listened to a K-pop song or watched a music video or interview from a K-pop group before, correct?

Had you heard of BTS prior to my educating you?

Yes, your honour, but only as a witness to other’s fanatic activity. I did not know the full extent, or the implications bringing K-pop into my life.

Well, that’s about to change.

The title song of BTS’ album Love Yourself: Her, ‘DNA’ speaks of fate bringing two people together. It is upbeat with a catchy tune and dance moves so in-sync, you almost forget they are individual people and not one living organism.

What do you think of the song? Is it what you expected?

It wasn’t even close to what I expected. I naively thought K-pop was a single genre, rather than, as you’d think its name would have suggested, Korean Pop Music. The music itself is pretty much what you’d hear from the Western charts, but pairing complex subject matter, like the ‘DNA’ maths equations, to a cheesy and simple styled love song is completely unique.

“If I just read the lyrics, I’d think ‘Yeah, that’s Hawthorne Heights, or some shit.’ but then you see the video…”

I’m going to be honest, the dance move they do with pointing to their arms just makes me think of heroin. But wow to the rest of it! It’s mesmerising how in sync they are.

What do you think about them as people? Does it give you an idea of their personalities?

They’ve got a clear douche-y, “I know I’m hot” vibe going on but it kind of works for them.

In the title song of Wings, BTS explores the ideas of destructive relationships and the typical bad-influences young people nowadays easily come across.

So, now who do you think BTS are?

Well, that was creepy. This one’s really interesting, the boys are sexualised in such a Western feminine way, like lying under the silk sheet. That’s refreshing, it’s not following the Western male beauty of being topless and muscular.

True, however, you then get the issue of men being over-sexualised, too.

“It’s amazing how beauty standards are so different, but that is still all they are. Standards. It’s equally as destructive to young people’s mindsets, just from a different angle.”

That’s why I love looking at Western and Asian Pop cultures together – there isn’t then only one deemed ‘attractiveness’.

Personally, I prefer these lyrics more than those in ‘DNA’. It sounds a little more like the boy’s usual writing style and they’re also a lot darker. What are your thoughts on a South Korean boy-band talking openly about mental health and depression in young people? Do we see it often enough in western pop culture?

I think lyrics are an amazing tactic of talking about mental health. So many people around the world are affected by it and being able to express emotions through music is probably one of the most effective ways to reach out to them. Personally, if I can relate to the lyrical content of a song, I’m much more likely to appreciate it. I think western music has struggled with mental health content, sometimes just cornering it as ‘Emo’. I would love to hear more mainstream western music talk about mental health and support those who are fighting it.

ARMY, BTS’ fandom, come up with pages and pages of theories for each 5-second scene of a music video. It’s become normal to expect BTS to torture us with complex hidden meanings and clues drawing links between each music video. In your opinion, is this unique to Kpop, or does Western Pop culture have its own version?

I don’t think that’s something necessarily unique to K-pop, it’s just something unique to large and dedicated fan-bases in general.

Let’s not get too into the politics (and I won’t pretend to be an expert) but, basically, what I have heard is that this song is based off a true, tragic event, The Sewol Ferry. BTS told the story of a group of friends involved in the mass-death that occurred and made a point to talk about it, if under the radar, even though all Korean Idols had been expressly told not to bring it up and act as if nothing had happened. Even after moving on to different albums and era’s, BTS continued to support the family’s who had lost somebody to the tragedy, raising money from others and giving their own.

Knowing that the South Korean government prefer to sweep things under the rug, how does BTS’ reaction to a large-scale tragedy compare with western examples? (E.g. Ariana Grande and the Manchester bombing, Recent London ISIS attacks)

I think it’s shocking that I hadn’t already heard about this tragedy and I absolutely love that BTS created a tribute to the event, even when they weren’t meant to.

“I think a lot of tragedies that occur across the globe tend to get hushed up in the music industry, which feels like such a waste of a platform that has so much potential for informing and celebrating life.”

On a lighter note, have you been surprised at the drastic change of style both visually and musically? Is there anything that you can easily see which connects all of BTS’ content?

I love how different this music video is. The lack of dancing is such a clever way of drawing the attention away from BTS and towards the content they are actually singing about. They’ve kept the concept of acting as a character to tell a story but completely changed how they are telling it. Musically, it has a much stronger indie vibe than the other songs, which I personally prefer.

Moving to a little older music, BTS’ Trilogy of The Most Beautiful Moment in Life (parts 1&2) and You Never Walk Alone, was the first time they truly explored a storyline within their theme.

At this point, are you just expecting each song I show you to be different? Do you find that you can almost guess what year a Korean song is from just from knowing what was popular in the Western charts at that time?

I think I’m actually starting to see the trend of their music now. All of the songs you’ve shown me so far are completely different but they absolutely suit the year they were released, relating to western music I’ve heard before. Is this BTS or Jason Derulo?

This is true fetus BTS, now. The title song of their first ever release in 2013 (though, not their debut song).

Originally BTS were supposed to be completely rap-based and with very little singing at all. They were going to be a hip-hop group with a hard image. Is this close to what you expected BTS to have started as when you heard DNA?

Not at all. If you didn’t show me the video, I would confidently say this was a different band. I think their style in this video is how every teenager who listens to hip-hop think they look. I actually really enjoyed this song but it definitely reflects their age.

Do you think the style they evolved into is more organically them? Or, do you think this is just their next manufactured style?

They look much more comfortable in their more recent music videos, but it’s hard to tell if this is due to the style change or if they’ve just become more used to the industry. I would guess that like most pop artists, their style will change again to follow the western charts.

It’s interesting that you see Korean Pop culture as following Western pop culture. In many ways, I agree, but the west follows Asia a lot too. Remember when circle rim glasses and hugely oversize jumpers were suddenly in style? Asia did that way before us.

That’s a very good point, I guess all cultures are intertwined in a way.

Coming full circle, their latest release, IDOL, talks of how even though the world gives them names and roles, they are just themselves. The theme of the last three albums has been based around young people being able to love themselves, with BTS even creating a charity around this and speaking at UNICEF. I also showed Nicole ‘Sample of my Pasta’, a bad lip-reading of BTS’ ‘IDOL’. This kind of ‘memery’ is just such a good example of ARMY’s crack culture.

Having heard a lot about BTS’ history, what they do around the world, and a little of who they are, how does your current opinion differ from your immediate one having heard ‘DNA’?

“The bad lip reading is somehow closer to what I was expecting K-pop to sound like.”

I’m impressed by how different all of their music sounds, it really shows how versatile they all are, especially with their dancing. I do still think they give off a douche-y and cocky vibe but I’m now convinced that they wouldn’t be as loveable without it.

Do you think IDOL is a good representation of them as artists? Do you think any one song is?

I don’t necessarily think one song could represent any artist, especially one as diversely ‘genred’ as BTS. Each song seems to represent a different time in their journey in the music industry. I think until you listen to a good handful of different songs, you can’t create an accurate opinion of them as artists.

You may not suddenly be an ARMY, you might not even say that you like BTS, but do you think you understand a little more about them and Kpop in general? And do you think you could potentially become a fan of a Korean Indie band, that being more your style?

I feel like this has definitely opened my eyes to music outside of the western world. I’m excited to see how different countries portray different genres. I also want to take up dance lessons now.

To summarise BTS to fellow K-pop virgins, imagine UK pop music, with lyrics that descend you into a spiral of thoughts and emotions you never expected, accompanied by some outrageously in-sync dance moves. That’s it. BTS.