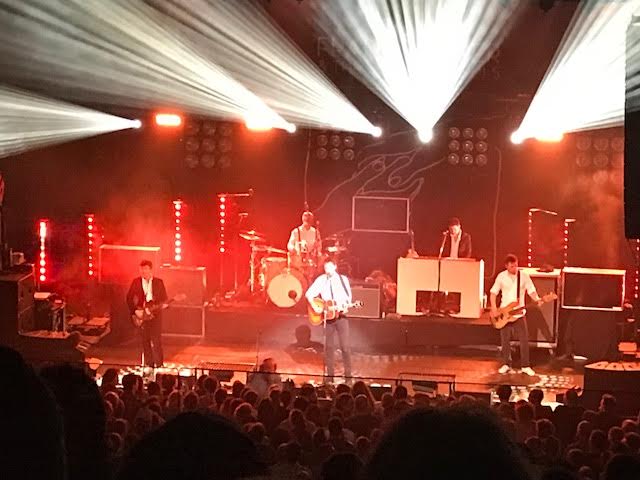 So I took my mother to a punk show the other night. Yeah I know, it’s not the most conventional activity for a Monday night out in Cambridge with one’s mom who works a 90-hour week and has a big meeting in the morning but there it is. See I’ve made it a long-term goal to get her into hardcore and I figured I’d work my way up, starting with the folkier acts until I can get her into the pit at some seedy punk club. I know she’s already kind of a fan of tonight’s main act, Frank Turner and the Sleeping Souls. I like them a lot too, they’re fucking great. If I’m honest though I could have left after the first support act and still reasonably claim to have had my money’s worth. Seriously, I’ve been wanting to see this band for years now and boy did they live up to expectations. The band in question is actually one guy, a 5ft 8-ish, fanny-pack-slinging, slightly-out-of-tune-guitar-wielding weirdo from western Pennsylvania wearing a really ugly floral print sweater. This is Derek Zanetti, better known as The Homeless Gospel Choir.

He bursts onto the stage throwing kicks and punches at thin air as if a horde of invisible fascists had tried to crawl on stage with him. “This’s a fuckin’ protest song” he announces before launching into ‘With God On Our Side’ a tune that calls out the hypocrisy of American nationalism in the face of the damage it constantly inflicts upon the world at large. No punches, it seems, will be pulled tonight. “I hope this song offends you,” Derek says of his second number, ‘Musical Preference’ (another protest song of sorts), and indeed the odd shriek of horror can be heard upon its denunciation of Mumford & Sons (his dig at Fleetwood Mac sparks no such outrage). Having finished slagging off all of our favourite bands (and Mumford & Sons) he plays ‘Why?’ (also a protest song), a call to arms for those who feel like they don’t stand a chance of ever making a positive change to society.

The rest of his set sees a departure from political themes and into the world of mental health, tackling his own issues with isolation and abandonment with ‘Crazy’ and ‘Depression.’ Then it’s ‘6th Grade’ an amusing yet heart breaking jab at unsupportive authority figures. Each of these, Derek hastens to remind us, is a protest song.

“There’s holy war fought overseas, all in Jesus’ name
but I just sit here drinking with all of my best friends,
spending money we don’t have until the recession ends”
– ‘Why?’, The Homeless Gospel Choir

Zanetti caps his set off with a rousing performance of ‘Normal’, the title track of his last record for which he is joined on stage by Arkells, the second act of the evening. For the first time tonight we have a full band onstage and yet the performers are almost completely drowned out as Derek leads the 1,800-odd strong crowd in a singalong of “You’re never gonna be normal, ‘cause you’re a punk.”

Arkells – a band I had not heard of until a month ago but of whose most recent record, Morning Report, I am now a proud owner – put together a pretty impressive showing of their own. Keen not to upset the theme of the evening they have scattered the odd protest song of their own into the set list. They come out of the gates swinging with ‘Knocking At The Door,’ an ode to the power of grassroots movements to bring about meaningful advancements in civil rights with a nod to the all together more inclusive and progressive society of the band’s Canadian home world. Missing is the horn section that typically accompanies Arkells at their larger shows, but keys player Anthony Carone (with a little help from a backup guitarist pulled from the crowd) proves himself more than capable of picking up the slack in support of frontman Max Kerman’s soulful howls.

The five-piece quickly endear themselves to the Cambridge audience with shots at scumbag rich kids (‘Private School’), Wall Street types (‘Fake Money’) as well as our mortal enemies in Oxford. Of course, on a night of political music there is one name people want to hear lambasted above all others. He gets his moment on the Hamilton, Ontario band’s latest single, ‘People’s Champ.’ “Google this when you get home,” Kerman instructs audience, “He was born on third base and thought he’d hit a triple”.

“You’ve got no sense of history
You’ve got the world at your fingertips
And now you have it crumbling”
– ‘People’s Champ’, Arkells

These guys are fun!

After the show is over I spot the Homeless Gospel Choir by the doors chatting with some fans and I manage to make my way over. I don’t quite know what I will say to him. Something profound and heartfelt about how in just seven songs he’d managed to speak to just about every insecurity I’ve ever had? How he’d shown me that, even though we now live in a society where hatred and violence become more normalised with each passing day, there is still reason to have faith in humanity? How honoured I was to have taken the ‘holy sacrament of punk rock’ in his exalted presence?

In the end all I manage to get out is some embarrassingly incoherent nonsense about how much I enjoyed his show. I guess Derek gets the message well enough, though. He shakes my hand, looks me in the eye and, in what might be the most sincere expression of gratitude I have ever received, thanks me for coming to see him play. As far as he’s concerned that handshake probably lasted an uncomfortably long time. For my part I had a really hard time letting go.

Oh, and Frank Turner was there too.