It’s 19:37. I’m sat on train tearing though picturesque English countryside like a hot knife through butter with a beautiful sunset to my right. If Picasso were here, you can bet he’d be painting. But me? I’ve got my nose buried deep into the new Beans On Toast book.

“GET YOUR DICK OUT” ~ BEANS ON TOAST

For those of you unfamiliar, let me sum up: Beans is a poet with strong morals and gravelly voice. Since his 50-track debut nine years ago, Beans has toured both home and away to take his music and message to the masses.

Drunk Folk Stories is something new, and part of Beans’ – err, nine year anniversary. Confused? So to was he apparently, stating “To be honest, I thought it was 10 years when I put the plan together, but hey ho”.

Importantly, this isn’t an autobiography. There are certain areas that are left out. Instead, what we have are a large handful of fantastic stories picked out from his life. From the opening with his first Glastonbury experience, to the finale and its important life messages, Beans effortlessly intertwines comedy, storytelling and pearls of wisdom. It’s a characteristically Beans approach to writing a book and brooks no disappointment. 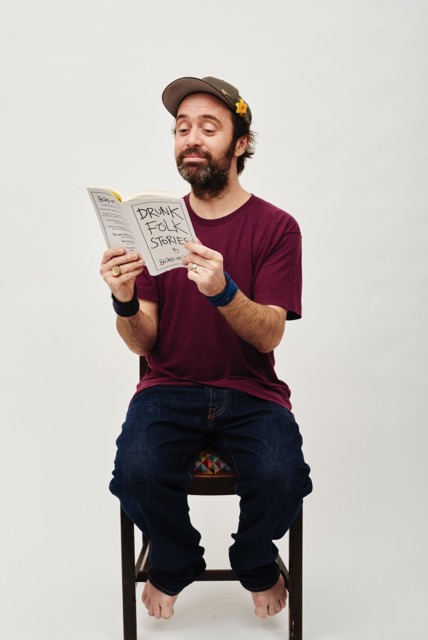 Fans shouldn’t hesitate; it simply adds the cherry to nine years of songwriting cake. But, surprisingly, it makes for a good read otherwise. Those unaware of the man shouldn’t be disengaged with a read that has a little something for everyone.