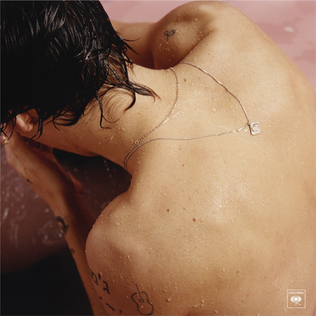 If I told you that the leading member of a boyband that sold out stadiums with droves of screaming, fainting teenage girls has just dropped an album that will leave a dent in the course of British music history, I’m fairly certain a lot of musical cork-sniffers would start to palpitate and sweat profusely. You know, the kind of elitist prick that would demean anyone who doesn’t listen on vinyl through a four-grand hi-fi?

Well, buckle up; corks at the ready, because I’m sure of it. I’ve joked about a return to Jazz to mark the return of the Roaring Twenties, and whilst Styles hasn’t taken a full leap of faith, he’s definitely taken a step towards it! Forget the bubblegum pop and skinny jeans. Forget the fresh-faced harmonies. Instead, you’ll find Weller-esque songwriting prowess, with a grit-ridden vocal that sounds like one too many cigarettes, smoked for two too many years.

Plus he has a pink suit. To quote Paul Simonon (The Clash) “pink is the only true rock’n’roll colour”. And whilst dressing up like Jimmy Hart and donning a Jazzbox guitar could be construed as a fake stab at authenticity, it doesn’t feel that way here.

Released back in May, I feel like I’ve almost come late to this party. But seemingly so did Harry, whose psychedelia influenced album feels forty years behind its time. A mark of his older influence, I’m hoping that this can influence a far wider change in the music industry. Confused? Probably not, but I’ll explain anyway.

Why? Because all three of these had a great chance to change the music industry. All three were rock bands, that gained popularity and had a chance to swing that mildly anarchic, guitar-driven genre back to the forefront of popular music. But all three bailed. After a taste of the life that being a bubblegum pop star could entail, they moved away from the authentic roots they had honed and started to create sub-par, radio rock that frankly has about as much substance as a vacuum.

Even a quick listen to this album will show you this is different. Kiwi and Woman offer straight shooting alternative pop with big hooks. Ever Since New York can’t help but remind me of Styles time with pop-princess Taylor Swift; a country-esque tinge? Or maybe I’m just reading too much into it. Meet Me In The Hallway is distinctly Bowie-inspired and leads straight into Sign Of The Times (arguably the standout track on a top quality album) with swirling seventies swagger. Two Ghosts looks to challenge that notion with easily the most One Direction sounding track on here. If this isn’t a rejected track from his time with them, I will eat my proverbial hat, but down let that detract from the songs’ hit potential. Of course there was gonna be a radio banger or two, he’s Harry fucking Styles.

And then, when you thought everything was emotional out, you’re hit with album closer From The Dining Table like a Babe Ruth swing to the chest. Styles is unusually raw here, in a timid, heart-wrenching ode to a former lover. Although no-one needs to know about “play[ing with] yourself” in a hotel room, Harry.

Harry Styles. We’re not who we used to be.